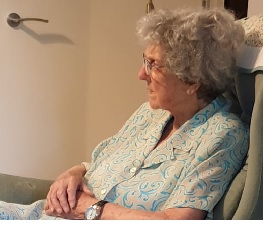 I had made a booking with the care home to visit Anne in her room at 10
am; a rare favour these days.
I had told them that Mary would come along with me, and stand outside
her (ground-floor) window, and wave; and they said that was fine.

We took our presents with us, and a few others that had come to our
house, and a pile of cards likewise; also a bunch of flowers from our
son and daughter-in law, a chocolate birthday cake (for general
distribution), and a helium balloon from one of Anne's God-daughters.
The care-home people knew that it was Anne's birthday; and they were
very welcoming.
When I had washed my hands, put on rubber gloves, a face-mask and an
apron, I was allowed to proceed to Anne's room.

She was sitting up in bed, with her hair done nicely; and she was
pleased to see me. I opened the curtains fully, and Mary waved to us
(she soon wished that we had brought a folding chair).
A carer brought in the cake, cut 3 slices, and we each ate one: the
window was open just wide enough for us to pass Mary's piece through.
Several bunches of flowers had already arrived at the care home, and the
staff produced vases, and set them up (6 in all) on the window-sill and
various flat surfaces in the room.
They also brought in an extra table, for flowers and for cards.

I then went through the cards one by one, showing them to Anne and
reading out the messages therein. She responded gratefully to the names
of all the senders.
That took quite a long time, as there were almost 40 cards -- and some
with long messages. One of the last envelopes to be opened contained a
warm letter from Owen Nwokolo, the Bishop on the Niger, complete with
quotations from Proverbs 16:31 and Isaiah 46:4.

After that we opened the various presents that had been sent --
nighties, warm socks, chocolates, etc..
Throughout, Anne was very pleased and grateful for all the good wishes
and gifts that she had been sent.
Then it was time to go, and we said our goodbyes.

But as I was walking back along the corridor towards the entrance, I ran
into the head nurse, who was bringing yet more greetings cards, that had
just been delivered.
I told her how pleased we were that Anne was so much better than when I
had last seen her, on 1 July. She agreed, and said that Anne had been
improving ever since her GP had come to see her on that day, and had
stopped some of her many medications.
I returned to Anne and shared these newly-arrived cards with her; and
then finally left, having thanked the care-home staff for all their
continued help.

We have been following the care-notes that are available to us on-line;
and we are pleased that Anne continues to eat pretty well, and to drink
a fair amount of fluids daily.

Anne was particularly grateful for the card and flowers that you sent on
behalf of the JWGS old boys.